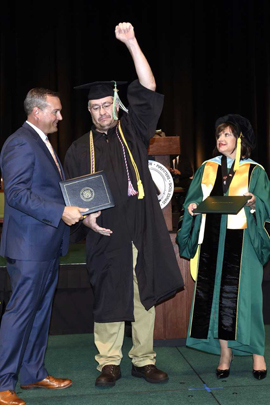 Wrapping up another successful week of training at Washtenaw Community College, United Association General President Mark McManus called the 1,835 union members who traveled to Ann Arbor for the annual Instructor Training Program the backbone and the future of an organization that represents more than 343,000 plumbers, pipefitters, sprinkler fitters, steam fitters, welders and service techs across the United States and Canada.

McManus’ comments were made at the UA Completion Ceremony held Thursday, August 17, at the Eastern Michigan University Convocation Center. More than 137 newly certified instructors were recognized, as well as 29 members certified as training coordinators and another 11 who earned an associate degree from Washtenaw Community College.

United States Secretary of Labor Alexander Acosta was the guest speaker at the ceremony. Since being nominated to the post by President Donald Trump, Acosta has strongly supported apprenticeship programs as a way to close the nation’s skilled trade gap. McManus said Acosta called him during his first weeks on the job to learn more about the UA’s highly regarded apprenticeship programs. Acosta extended an open invitation to the 32 apprentices that competed in the UA’s International Apprenticeship Contest to visit him in Washington D.C. and discuss their experience.

Acosta, the son of Cuban immigrants who graduated from Harvard Law School, is also an educator. He was the dean of the Florida International University Law School before becoming the Secretary of Labor. As such, he told the graduates that he understands the value of education and praised the certified trainers who will now return to their locals and instruct the next generation of skilled tradespeople.

“You will be profoundly impacting their lives and, by extension, their communities,” Acosta said. “That’s awesome.”

Acosta noted there are 6.2 million open jobs in the nation, many of them that cannot be filled because of a shortage of trained skilled tradespeople.

The ceremony was the exclamation point on the union’s 28th year of hosting its week-long Instructor Training Program at WCC, during which students take college-level training courses to become certified UA journeymen and apprentice instructors. Those receiving associate degrees from WCC completed online courses in programs designed specifically for UA members.

When WCC President Dr. Rose B. Bellanca asked those who earned an associate in Applied Science degree to stand – they were in traditional graduation gowns sprinkled throughout the graduating class – and move their tassels to the left side of their cap, the college’s alumni base expanded with new members from San Francisco to Juneau, Alaska, to Shreveport, Louisiana, and beyond.

“Although we call this a completion ceremony, really it is the beginning of a learning cycle in which you will share what you learned here with your peers and colleagues,” Bellanca said. “They, in turn, will share the information with their co-workers, benefiting current and future generations of skilled tradesmen and women.”

Richard Jacobs, a union plumber and inspector for the city of St. Paul, Minnesota, was one of six people to earn both an associate degree from WCC and UA instructor certification. He said the associate degree was the fulfillment of a personal challenge that began in 2007, when he attended his first UA Instructor Training Program. There have been five subsequent trips to Ann Arbor to participate in the program, as well as online WCC classes combined with college credits he earned previously.

“I can use the degree in the career path I’ve chosen, but it also helps in other ways,” Jacobs said. “It really solidifies the choices I’ve made and the training I’ve received.”

Part of the UA’s week in Ann Arbor includes a block party, 5-kilometer run and pub crawl organized in partnership with the Ann Arbor Area Convention and Visitors Bureau. Those events serve as a fundraiser for the Semper Fi Fund, which assists wounded veterans.

Thanks to a record number of 5K participants from the UA and the Ann Arbor community, the events raised $38,050, eclipsing the previous total for the sixth consecutive year. The UA matched those fundraising efforts and additional donations from vendors brought this year’s total contribution to more than $80,000.

Prior to this week’s event, the Ann Arbor Area Convention and Visitors Bureau commissioned an economic impact study that showed the WCC-UA partnership resulted in a $7.6 million financial gain for Washtenaw County in 2016.