Scholarship Helps a Family of Five in Times of Severe Hardship 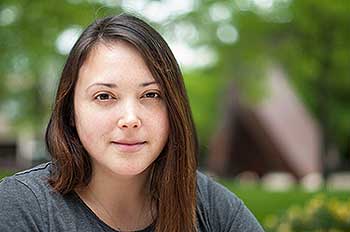 When brides pronounce the customary words “till death do us part” on their wedding day, death is, in fact, typically not on their mind. But things were different for Catherine Lollio. A year before her wedding, Tony, her future husband, was diagnosed with amyotrophic lateral sclerosis, a progressive neurodegenerative disease. It is a terminal condition and the couple, parents of three young children, were told that he only had two to five years left to live.

A former U.S. Army veteran, Tony had to quit his job because of his declining health. Catherine continued to work in retail for a year but subsequently had to resign. “Tony became paralyzed and depended on me for all his physical needs. I needed to transition to the role of his primary caregiver,” she explained.

Faced with the responsibility of supporting her entire family, she saw salvation in education. “After the first year of initial shock and denial from the diagnosis wore off, I realized that getting an education was key to making sure that, when the time would come, I could re-enter the workforce and support our family on one income,” Catherine said.

That’s when the WCC Foundation came into the picture. Catherine was awarded a scholarship that allowed her to enroll in Washtenaw Community College’s business program. “The Foundation Scholarship has lifted a tremendous financial burden off my shoulders. I no longer have to wonder if paying for books this semester will be more important than my husband’s supplements and therapies,” she said.

Catherine has been juggling wife, mother and student duties with all her might. “After I put my children to bed every night at 8:30 p.m., I start my homework and study until my eyelids won’t stay open. I wake up at 7 a.m. and do it all over again.” Her hard work is paying off. An honor student, Catherine will graduate in May 2017. She already plans on earning her bachelor’s degree thanks to WCC’s transfer agreement with Eastern Michigan University. Ultimately, she would like to open her own retail store. Doing so would allow her to support her family while working alongside her husband every day.

Like many other WCC students, Catherine had the grades, the will and the work ethic required to succeed. Now she has access to higher education thanks to the financial support of the WCC Foundation. She highlights the fact that, by helping her and Tony, the donors also make a difference for their three children, Eva, Francesca and Penn: “Because of your generous support, you have made attending college possible for me. You have given our family a step up in this world, and helped us through this difficult season of our lives. To say thank you is simply not enough.”